SOME SIGNIFICANT SEPTEMBER DAYS FOR THE CHEVALIER FAMILY 2019 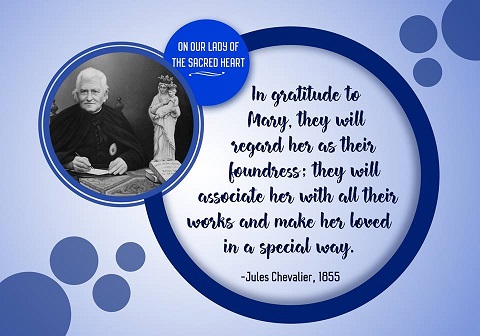 - the date for the naming of Our Lady of the Sacred Heart, the blessing of the statue at Issoudun, the profession of final vows 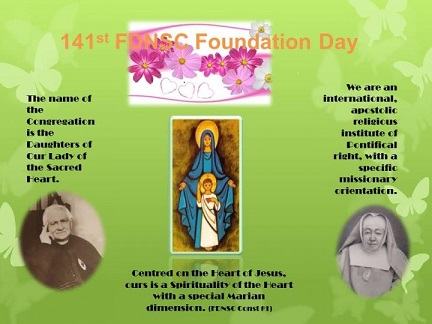 1 September, 1897
The erection of the German MSC Province. Blessing of the first MSC house in Hiltrup, Germany.


1 September, 1899
First 8 candidates of the MSC Sisters are received as postulants in Hiltrup.

4 September, 1861
Father Maugenest becomes the first MSC to be parish priest of St. Cyr, Issoudun. He remains in this position until 31 December, 1871.


4 September, 1945
The missionaries imprisoned by the Japanese during WWII in Ramale Valley, Papua New Guinea, are set free. The movie, entitled Sisters of War, produced in 2010 by an Australian film company, tells part of this story.

5 September, 1907
This date commemorates the opening of a 'special' MSC General Chapter which revised the Constitutions in the spirit of the "Roman Norms" of 1901. This Chapter occurred only a few weeks before Father Chevalier's death. He could not be present at the Chapter.

6 September, 1962
Father Karel Verwilghen, from the Netherlands, is shot in San José Nueva Ecija, Philippines. He died on 8 September in Quezon City, Philippines.

9 September, 1884
Five Daughters of Our Lady of the Sacred Heart make their first vows. Marie-Louise Hartzer is among them.

12 September, 1855
L'abbé Caillaud, the General Vicar at the time, blesses the humble chapel (barns) in Issoudun and gives to the first two members of the society, Jules Chevalier and Emile Maugenest, the name Missionaries of the Sacred Heart of Jesus. It was on this very day that Jules Chevalier thought, for the first time, of the title "Our Lady of the Sacred Heart".

13 September, 1901
Mother Marie-Louise Hartzer makes her application to the French Government for the authorization of the Congregation as exacted by the law of 1 July, 1901. This fact prevents the local authorities at this time during the political-religious unrest from affixing seals to the FDNSC mother house in Issoudun.


13 September, 1912
Father Franciscus Maria Victor Jouët dies in Rome. He is buried in Marseilles in the south of France, in his original diocese. On 2 July, 2003, his remains are interred in the Crypt in the Basilica in Issoudun.

24 September, 1881
The novices of Father Piperon, who arrived in the Netherlands, November 1880, after having been expulsed from France, make their first profession. Among them is Hubert Linckens, who will later become the historical founder of the MSC Sisters.

27 September, 1869
Jules Chevalier and his first companions made their perpetual vows at the end of a retreat preached by Father Ramière, SJ.