While Deacon Boniface died in June, his funeral was celebrated on Friday August 23rd.  We thank Leo Wearden MSC for sending the ABC Report, reflections by Frank Brennan SJ, and a letter from the MSC Superior General, Fr Mario Abzalon Alvarado Tovar. And some photos.

Thousands of guests farewelled Deacon Perdjert, 82, in Wadeye, about 400 kilometres south-west of Darwin, on Friday.

His casket heaved with brightly coloured flowers, some real and some plastic, as dancers from different ceremonial groups performed.

Senator Pat Dodson removed his hat and bowed to the coffin, moments after a uniformed police officer gave it a resolute salute. 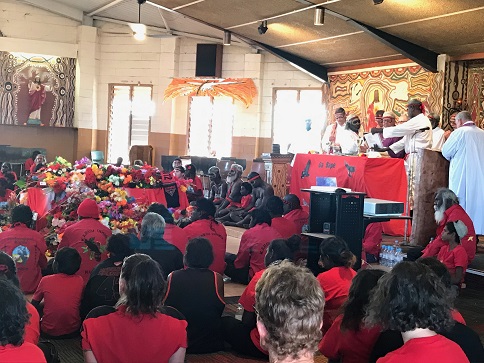 Deacon Perdjert was the most senior traditional owner of the land on which the town of Wadeye, also known as Port Keats, was built.

Deacon a calming force in face of clan tensions

A former mission, more than 20 clans from seven language groups live there together, and road access is cut off for months at a time during the wet season, isolating the community.

"He was the leader, he was always our go-to man when there was any issues in the community, to help us out," he said.

"Also just such a generous man, very well respected, both by community and police.

"He wouldn't necessarily get involved [in the fighting] but just mentioning his name, the respect that people have for him — if it got really bad or to a situation we couldn't control, we'd always mention him and say, 'look, have some respect for the deacon and calm down'.

"And nine times out of ten it'd work."

Deacon Perdjert was remembered in a day of ceremony, including a procession from Wadeye's morgue to the basketball court, where he was ordained as deacon in 1974.

A Catholic service followed, where mourners heard of a boy who learned Latin at a young age, and grew up to love hunting. 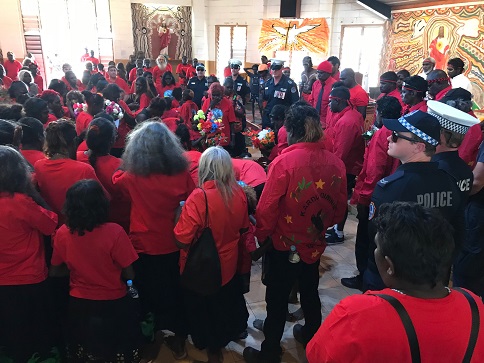 Most of the thousands of guests were dressed in red and black, the colour of Deacon Perdjert's totem, tek — the red-tailed black cockatoo.

Some sported Essendon scarves and jerseys, the football team he'd had a lifetime allegiance to, drawn in by the signature colours.

In a eulogy conducted in both English and Murrinhpatha, the crowd heard that since his passing, the Perdjert family had seen a lone cockatoo flying over his house, heading south.

It was the old man saying goodbye, they said.

Deacon Perdjert and his wife Bridget, who passed away in 2002, had three daughters, 11 grandchildren and 13 great-grandchildren.

Today the People of Wadeye have buried Deacon Boniface Perdjert.

I write on behalf of all MSC to offer our prayers and condolences to Deacon Boniface’s family, to the Kardu Diminin Clan , and to the broader community of Wadeye. It was a privilege to meet and learn about him when I was in Wadeye last year. 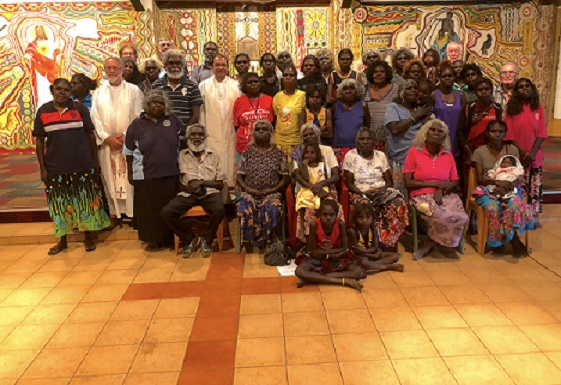 Here in Rome the community of the General House was with you in prayers as Deacon Boniface was laid to rest this Friday. I was reminded that last time Deacon Boniface was here in Rome was for the canonisation of St Mary MacKillop in 2010 when he was the Deacon at the canonization of Australia’s only saint, so far. I am told that he was the deacon at the 1995 beatification Mass celebrated in Sydney by St Pope John Paul II

Since his diaconate ordination back in 1974, in the days of Bishop John O’Loughlin MSC, Deacon Boniface has been at the centre of Wadeye. I'm told he held a place of honour and importance that is difficult for non-aboriginal people to appreciate.

But I would like to make special mention of his unfailing support to the numerous MSC who came as missionaries to Wadeye. Time and time again, he welcomed new faces to his world and with unfailing patience was there to help them to understand your unique culture with its own fresh perspective on the Gospel message. Any missionary to another culture needs humility and a capacity to see the world through different eyes. No doubt Deacon Boniface found some of my confreres more open to this invitation than others.

But across 45 years he has been there with unfailing patience and goodwill towards each new MSC who came to Wadeye,

I am sure that is with so many other people of Wadeye who stand before the face of God, along with some of those MSC blessed to work alongside him. May his memory live on as a testimony to the Gospel he proclaimed.

Frank Brennan SJ and reflections on being in Wadeye, at the funeral and the Confirmations which followed on Sunday.

A trip this afternoon to the original mission site where Fr Docherty came ashore in 1934 and assembled his T Model Ford which travelled in parts on the sailing boat. This was the birthplace of the late Boniface Perdjert. To think this is one of the few places in the Northern Territory where there were no killings when white first met black, and it's largely stayed that way. In 1935 Docherty and his local guides sought out the new mission site where there would be access for a barge, timber for housing, an adequate water supply and gravel for an airstrip. 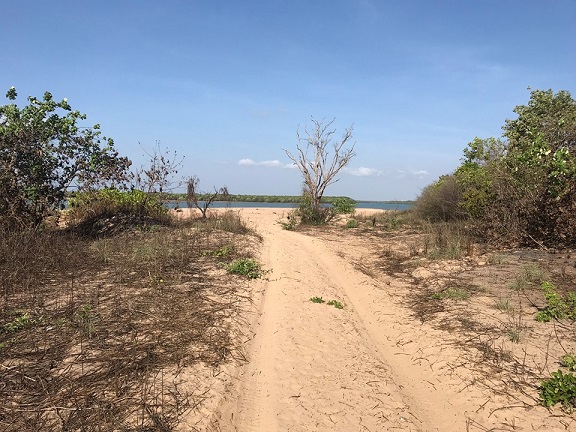 A very moving six hour funeral here at Wadeye today for Deacon Boniface Perdjert, a respected community leader and the first permanent married deacon in the Australian Catholic Church. I was privileged to be here, as Bonnie attended my own ordination as a priest in Brisbane back in 1985. He played key roles in each major church event in recent times - he welcomed Pope Benedict to Barangaroo for World Youth Day and he participated in the liturgies for the canonisation of Mary MacKillop in Rome. May he rest in peace.

An extraordinary week of liturgical celebrations here at Wadeye. It's been so good to be here for the preparations for the huge funeral of Deacon Boniface Perdjert, one of the greatly trusted traditional leaders of Aboriginal society. The funeral itself was a six hour tribute from both cultures with Catholic liturgy and traditional ceremony. It was great to see Senator Pat Dodson in attendance. When he was a priest, he worked here forty years ago. Last evening we had a low key Confirmation ceremony at Palumpa. And today a grand joyful celebration of Confirmation here at Wadeye, remembering the old man who is now resting in peace in country and at the entrance to the church.