The subtitle of this book is Depictions of Catholic Priests in Cinema, 1900-2018. 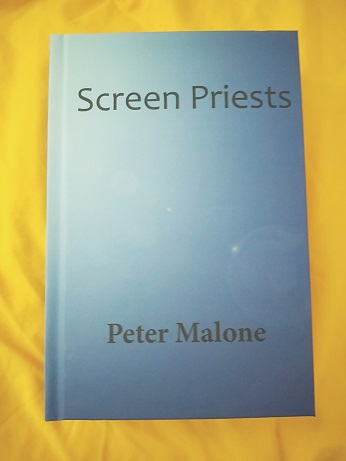 This is a book for reference, for consulting (its 700 pages include indices for film titles, actors who have portrayed the priests, directors of the film is) – but, readers interested in the topic may enjoy reading it through.

"Screen Priests" is a fascinating historical look at films about Roman Catholic priests from the first until Martin Scorsese's 2016 religious and cinematic masterpiece "Silence." With the scope spanning decades and the breadth embracing films mostly from the United States, Britain, Ireland, Canada and Australia, the researcher will find a treasure trove and the film aficionado will relish Peter Malone's encyclopedia knowledge and sometimes trivia of the world of priests on the silver screen. I found the historical introduction to the church and priesthood a helpful context to understanding the worlds of sacerdotal cinema. The appendices and index assist greatly in navigating this impressive tome.

Rose Pacatte, F.S.P., D.Min. is a Los Angeles-based award-winning co-author of several books with Peter Malone, as well as the current film critic for the National Catholic Reporter and St. Anthony Messenger.

From saints to sinners, martyrs to missionaries, exorcists to confessors, over time the portrayal of priests on the silver screen has changed dramatically. Peter Malone’s encyclopaedic knowledge of film has produced to date the most comprehensive, readable and engaging book on this topic. This monumental study, however, also equally maps social history and theological developments with the critical insight of an insider, both priest and film critic. Malone writes with the assurance of an authority, because he is an authority.

Richard Leonard SJ is Director of the Catholic Office for Film and Broadcasting, Australia, author of Movies That Matter, The Mystical Gaze of the Cinema and Where the Hell is God?

Priests, from the early times of cinema, have been seen in many roles, from small to major roles, on and behind the screen.  Peter Malone’s book discusses the presence of these priests on the screen and reveals that these "priest-character" are rather complex, from child abuser to the heroic defender of human rights even to the point to sacrifice their own lives for faith and cause.  In going into the manner how in so many different moments in history priests have been, Malone addresses a fascinating story of the changes in Catholicism and its institutions in the culture of the 20th and early 21 century.