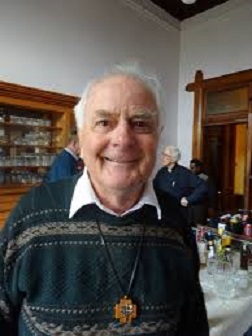 In recent years we have been acknowledging Australian MSC on the occasion of a significant birthday, especially when they turn 80. Tomorrow, August 2nd, Barry Brundell turns 80,

Barry Brundell came from Hamilton, Western Victoria, and did his secondary schooling at the Apostolic School, Douglas Park. He made his first profession on February 26th 1959. His studies for the priesthood were at Sacred Heart Monastery, Croydon, Sacred Heart Ministry, Canberra, and at the Gregorian University in Rome (including a year at the Australian National University, Canberra, 1961). At the Gregorian, he edited the student newspaper.

He was ordained in Rome in the MSC student house Chapel, 26th March, 1966.

He taught for a short time and Daramalan College, Canberra, and Downlands College, Toowoomba. He then spent many years lecturing at St Paul’s Late Location Seminary in Sydney, where he also served as the Rector. During these years, he completed a doctorate in theology and science focusing on Pierre Gassendi.

In the 1990s, he returned to Rome as superior of the International MSC student house, doing some work at the Gregorian. On his return to Australia, he became parish priest of Kensington, later moving for quite a number of years to Erskineville. During these years, he was the editor of the MSC theology periodical, Compass Theology Review (for 18 years, 1999-2016).

From Erskineville, he retired to Kensington monastery.