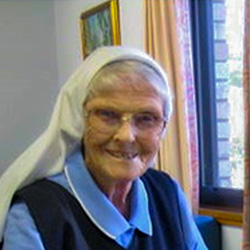 Eternal life is this: to know you, the only true God, and Jesus Christ whom you have sent. (John 17:3)

What amazing and reassuring words given to us by Jesus! With confidence in these words, we slightly understand what our Sr Damian Mary George is now experiencing.

Jessie George was born on 12th October, 1925, the third child to loving parents Mary McDermott and John George. Her mother was an Irish nurse, who met John when working in a military hospital in England. John was an Australian soldier who had been badly wounded in France. She followed him to Australia and they were married in 1919. Jessie was the third born in the family. Her siblings, Nancy, John and Frank have all predeceased her. Jessie’s father was raised as an Anglican but he never wavered from the promise he made to raise his children as Catholics. The depression years were difficult as John lost his job but eventually had his own carpentry business and built the family home in Bondi.

After completing her Intermediate at OLMC Rose Bay, Jessie worked in an office but found her niche in the book-binding trade. Having left school at 16 she belonged to the parish CYO and entered into its activities – tennis clubs, socials, dances etc. Later she worked for the American army for almost two years and found this a great experience. She was also very active in the Theresian Club and Sunday mornings were taken up with catechetical teaching of children from state schools. Through the Theresians she was introduced to an MSC priest and then went to Kensington to visit Mother Concepta. Waiting until she was 21 at her father’s request, she entered the postulate at Hartzer Park in February 1947, making her first vows on 6th January, 1949.

Her dream of ministering in the missions was realised the following year when she arrived in Papua New Guinea in February, 1950. Then followed 45 years of teaching and pastoral work in the Papuan region. She firstly spent a few months at the mixed race school at Bomana, outside of Port Moresby. From there she went to rural Veifa’a in the Papuan Mekeo area. She was there for seven years and became very fluent in the Mekeo language. During this time, Damian and Sr St Francis made their professions of final vows on 6th January 1952 at Yule Island.

Damian was a woman of determination and fortitude. In 1958 she was appointed to teach in Ononge which was our most distant mountain mission station located in the Owen Stanley Ranges – an isolated and rugged place high up in the mountains. In those days to get there was ten days by horse along tracks made by the French MSC priests and brothers assisted by the local men. It was a dangerous and tiring journey. There were small rat and snake infested huts available at the end of each day’s journey. On arrival there were chores to be done: saddles to be attended to, horses fed as well as the men accompanying the sisters on this journey etc. Once Ononge was reached the missionaries were usually there until the time of the annual retreat at Yule Island. So once more the trip there and back! However there was her ministry of teaching in the primary school at Ononge and assisting teachers at nearby schools which would have been on other mountain ridges!

Next Damian moved to the coastal areas of Inauaia, Orokolo and Putei. She was in Orokolo for fourteen years. This station and Putei in the Papuan Gulf were usually reached by travelling on the old mission boat St George, calling in at other missions on the way. As there was no anchorage for the boat at Orokolo she would have either walked or been taken by motorcycle to the station. The mission is on the Vailala river with settlements and villages all along the banks and dugout canoes with an outboard motor would have helped also to visit.

In 1981-82 Damian was in the Philippines where she attending the enriching programme at EAPI (East Asian Pastoral Institute). On her return to PNG she was mainly in the Mekeo area - once more at Inauaia and also at Waima, Mainohana and three years at Bakoiudu at the foothills of the Own Stanley Ranges. In these areas she did pastoral work in the villages and often was the stand-in when there were no priests available. Damian coped with situations with creativity as when she was in Inauaia the sisters didn’t go out after dark – partly due to snakes and partly due to prowlers. So Damian found a way to turn off the generator without going outside. She fixed a string to the controlling lever switch, brought the other end of the string to the convent and simply pulled the string which operated the control switch.

Sr Rita Grunke, who knew Damian well in these latter years, remembers her as a courageous missionary, a grassroots person. Compassion oozed from her wherever she was and with whomsoever she met. Everyone was a really special person to Damian. Status and rank didn’t enter her missionary ministries. Poor village drunks, the less sober politicians – all were people with dignity and this was the message Damian communicated to each. This all came from her deep spirituality of the heart and her prayerfulness.

At the end of 1993, Damian returned to Australia, officially leaving the Papua New Guinea Province in July 1995. She joined the Chevalier Community and in 2005 transferred to Daceyville. During this time she frequently visited the residents at St Joseph’s Aged Care Facility and spent some time each week with her brother Frank and his wife Mary-Ellen whom she loved dearly.

Damian was very appreciative that she had the opportunity in 1998 of visiting Issoudun and other places special to her. In September, 2014 Damian became a resident at St Joseph’s. She was quite unwell during this time, especially over the last year. Jesus, with whom she had walked for so long, called her to himself in the late afternoon of 7th June. She was 93 years of age and had celebrated 70 years of Profession on 6th January this year.

Sr Relida, Provincial Leader of the PNG Province, has written: Sr Damian Mary came to PNG at a time of post war expansion and she lived, worked and prayed in isolated and difficult places which required great resourcefulness. She made a lasting impression on one PNG Sister who lived with her in 1977, teaching her that in a missionary Congregation one becomes a “Jack of all Trades”: teacher, nurse, pastoral worker, catechist and home carer in order to help others. In this she summed up her own life.

Sr Damian Mary you left PNG almost 25 years ago but you are remembered as a true Daughter and a great missionary who really lived out the Spirituality of the Heart in all that you did to whoever you met and wherever you went. Thank you.